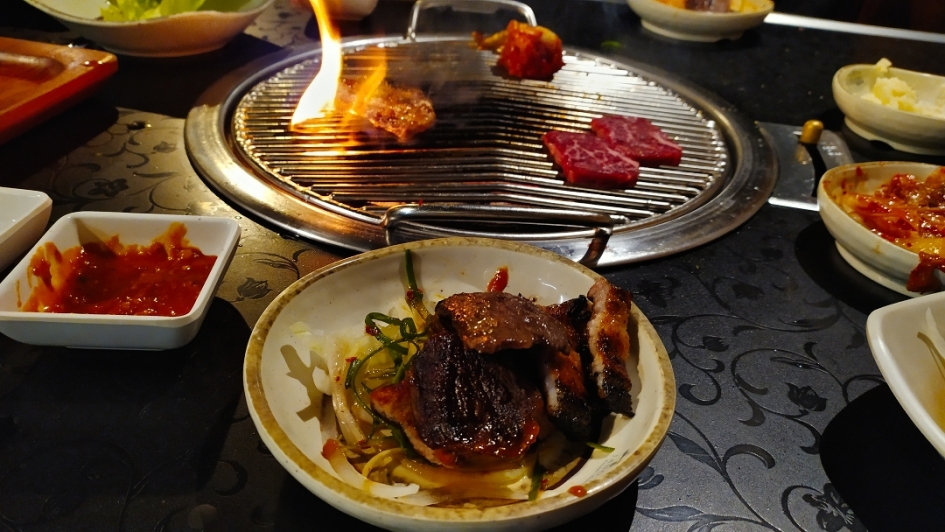 Like anyone looking for a restaurant I opened Google search and it gave me a list of almost 20 Korean BBQ restaurants in Strathfield. That’s probably more than any suburb of Seoul, but I guess they won’t call them Korean BBQ there, just BBQ restaurants. Most restaurants had a rating between 3 and 4 stars. That is a bit low, but when I past them on the way to my chosen restaurant, they were still full of people. I guess some people don’t care that much about Google rankings.

Two restaurants stood out. BBQ Biwon and Jang Ta Bal. They both had a rating of 4.4, and they are both actually right next to each other. So that’s what we decided to try. I don’t know if they were the best Korean BBQ restaurants in Strathfield, but Google ranking is what we had, and we went by that. Strathfield shopping center has 2 or 3-hour free parking, so that’s where I left the car, and the restaurants were no more than 200m from the center. It turns out, BBQ Biwon is closed temporarily, so Jang Ta Bal was it.

It looked like we had to go through the kitchen to get to the actual restaurant, but once inside, the place looked quite roomy, and already full of people, despite the early hour. We got there just after 5pm. We got a table easily and got a menu with a lot of options. They had a lot of different cuts both beef and pork. We thought about getting a combination platter of 3 different types of meat, but we didn’t want to eat that much meat, so we chose just a serving of wagyu marbled eye fillet and pork belly. 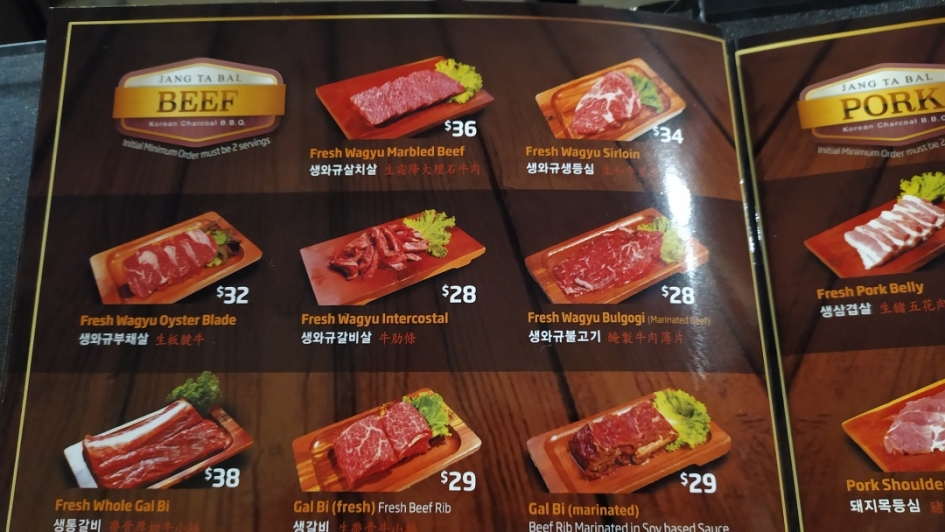 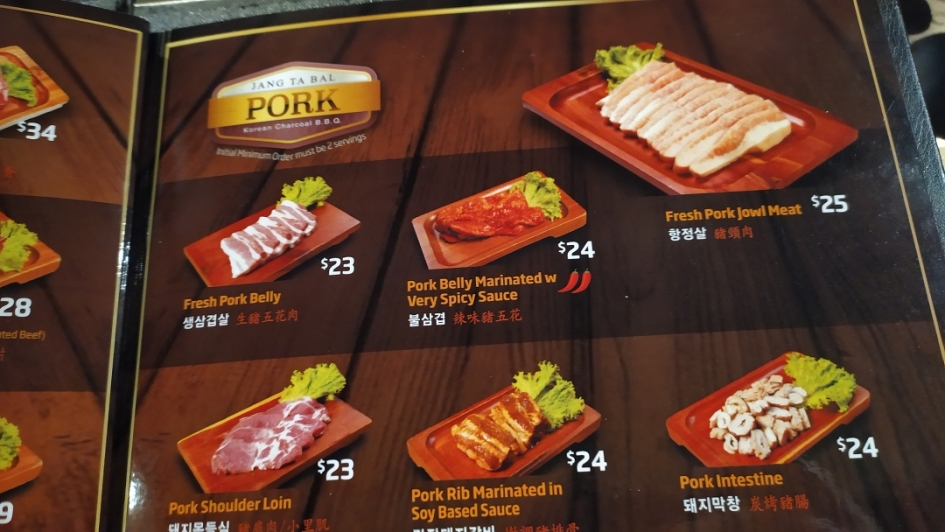 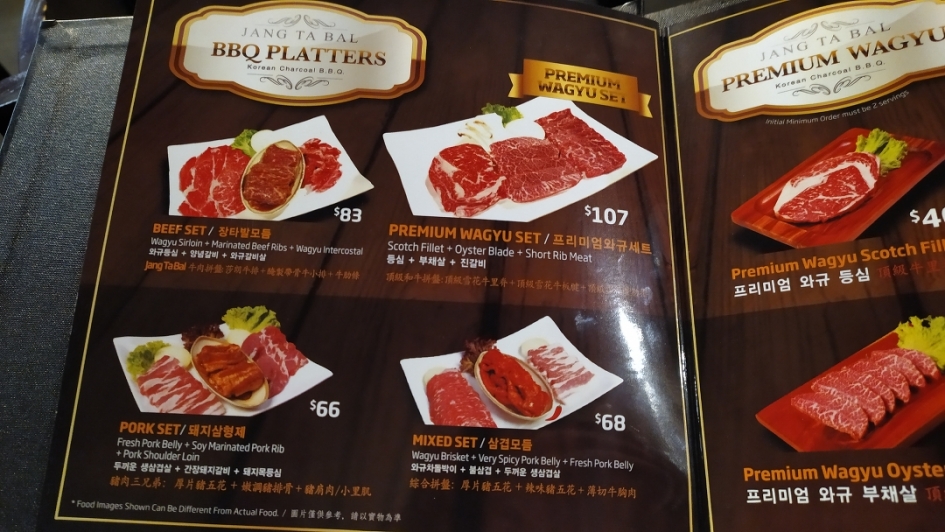 Soon after we ordered we got our burner set up with a glowing piece of charcoal which was nice, as the day was very cold and we were freezing. Then an assortment of condiments and cold dishes arrived too. Kim chi, some other preserved vegetables, I think there was a couple of pieces of crab as well. I really like kim chi. I’m usually not a big fan of spicy food, but this I can eat. Also, I’m Polish, so preserved cabbage is what I’m used to, just not with so much chili.

The meat arrived only a few minutes later. And I think we were both happy and disappointed. Disappointed that we would probably not get full with the meat we ordered, but happy we didn’t order more because we could easily eat double of what they brought. We always over-eat and we’re trying to cut back a little. The meat was great, as expected. I like eye fillets and I like pork belly. The sauce was nice too and of course the side dishes. We ordered extra kim chi 🙂 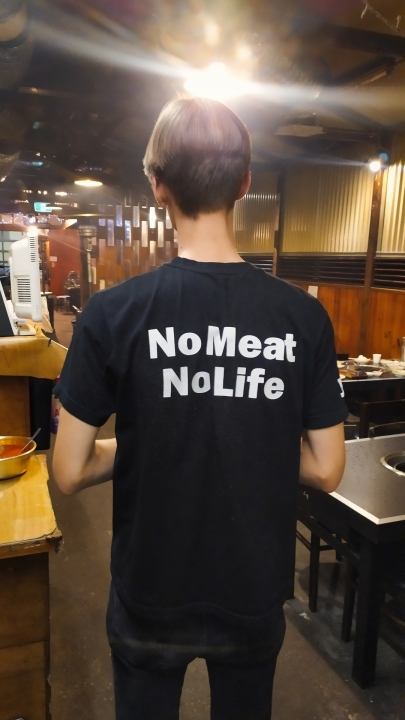 That’s what the waiters wear

Overall our dinner was great. We had enough food, but maybe 3 dishes for 2 people would’ve been a more satisfying ratio.  The service was also really nice, and quick, and very friendly. The whole thing cost us maybe 70$, so not too bad. I would definitely recommend that place, even though I might not go back there anymore. Not because there was an issue with the food. It is actually because the food was so good.

We liked the food so much, that we decided to get our own Korean BBQ grill, and we have a butcher where a wagyu eye fillet is 20$ a kilo. We have to buy at least 2kg, but it’s easy… and it’s delicious. So, I may not be returning to Jang Ta Bal Korean BBQ restaurant in Strathfield, but I am definitely going to enjoy Korean BBQ, and in the comfort of my own home, and a lot cheaper too. 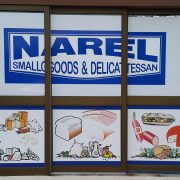 Adobe Lightroom, Exposure X6 or Capture One for image processing
Scroll to top