What golf clubs should I get?

When I first became serious about golf, about 6 months ago, I dusted off my old clubs I had in the garage. I bought them off ebay about 8 years ago, but I only played them a couple of times before I lost interest in the game. They looked brand new, but I was certain I had to get new golf clubs because in 8 years lots changed, right? But what golf clubs should I get? I went on a mission to replace my “defective” irons and find a good set.

I started paying a lot of attention to what is in great player’s bags. I was very unhappy with my golf so the clubs were blamed, of course. I checked the top 10 PGA golfers and studied what they have in their bags, to see if I can improve my game by putting similar gear in my bag.

I stopped that nonsense a few weeks ago. Could not care less about the clubs because I know that my game will not improve in any way if I get new gear. This only occurred to me when I started playing really well. I started hitting great shots with my bargain basement clubs and when I missed a shot, I knew who the culprit was. And it wasn’t my 5 iron, that’s for sure.

I also realised that what a player has in his bag has nothing to do with the quality of the equipment, but rather with the contract that he or she signed. Of course Jordan Spieth is all Titleist and Dustin Johnson is all Taylor Made, but if but if Ping offered them more money, maybe they would be Ping players.

And I’m not saying that it’s not genuine when they praise their equipment. The equipment they are playing is genuinely great. Titleist clubs are great. Ping clubs are great. Taylor Made clubs are great. Callaway clubs are great. And so on, and so forth. I mean, they are only a small chunks of metal. We’re not talking about space exploration. We’re talking about some 300g of metal either forged or cast. There are no unknowns, there are no secrets to the production and most things about the irons and especially about the driver are regulated, so they can NOT get better, faster, stronger. They are already at the limit and no innovation can change that.

The only thing that really changed in the last 30 years is the ball. That is why the pros can drive over 350 yeards, but even that is likely to be regulated soon, and there are talks about scaling back the golf ball driving distance. 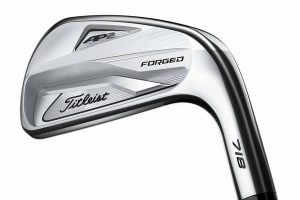 I am looking at Titleist AP2 in not too distant future

The point is, there is absolutely no difference in club quality between manufacturers. The only difference is the type of clubs, so game improvement clubs from Callaway will perform similar to Ping, and forged MB Mizuno will be similar to forged MB Titleist. It all really comes down to look and individual feel. However, what golf clubs should I get? is probably the most asked question on golf forums.

To me, the question should not be what golf clubs should I get, but why should I get new golf clubs? My opinion is that anyone who’s handicap is more than 10 and has clubs from this century, has not yet matched their golfing ability with their clubs potential. I think scratch golfers will feel the difference in club types, but for the average and below average golfers out there, what we already have is more than enough to get us to where we want to be. And when we get to where we want to be in golf, new clubs will make more sense, and perhaps even reduce the handicap by half a point.

For me, once I’m close to scratch I’ll look at something like the Titleist AP2. Love the look of blades, but I don’t think I should make it so hard for myself. My new irons will be forged and tour proven. AP2 certainly fit the bill there. Until then my old Callaway RazrX will be in my bag because I know that they are capable on shooting a much better score than I am able to achieve now. So to answer the question of what golf clubs should I get? At the moment – None! Just saved myself a $1,000

Golf By Feel – My method to learn golf
Scroll to top